This is a Ryoba Saw
A remarkable point of this Ryoba (Double Edge) Saw is that there are two blades in one saw - Cross-Cut and Rip-Cut. Therefore, you don't have to change your tools: you just use it! It is a tool that saves your time and saves your space in your tool box.

Cane-Wrapped Handle
The handle is wrapped with traditional rattan cane. This wrapping is very durable and if cared for will not unravel.

What is "SUIZAN"?
SUIZAN, a Japanese brand, creates Japanese hand tools of highest quality. With more than 100 years of history, all of the processes are completed in a Japanese city in Niigata prefecture called Sanjō, which is known for its craftsmanship. That's why our products are highly appreciated by many woodworkers.

Do you know about a "Pull Saw"?
This product is a pull saw. Japanese saws cut materials via pulling and thus are called "pull saws." It requires less power, realizes exceedingly smooth and accurate cut, and as a result, the cutting-section is clean. And particularly, this saw's blade is sharper and thinner (0.02 inch), and has a greater number of teeth per inch (9 & 15 TPI) than saws of similar size. If you have some difficulty using Western saws, just get to use a Japanese saw. You will never go back to use a conventional saw! 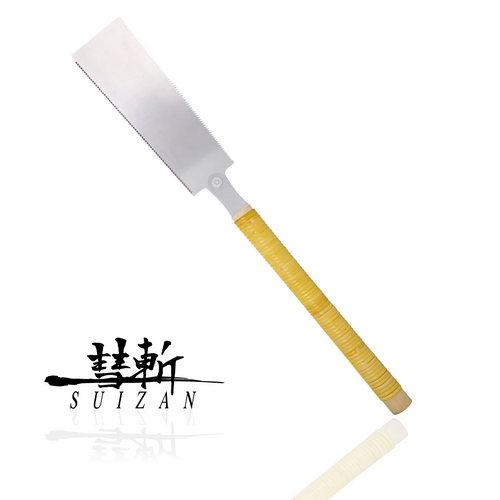